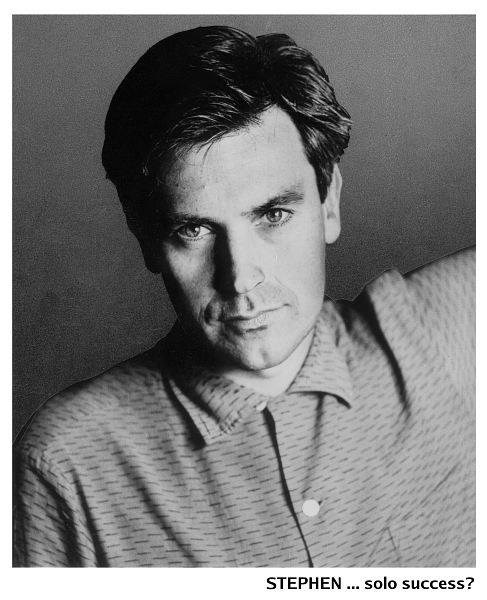 Ex-Sports singer Stephen Cummings is aiming at what he believes is a new area in rock - IAOR.

"Plenty of people in their late-20s and early 30s have grown up with rock music, but there's no intelligent adult rock," Stephen told SCENE.

"It seems to jump from Daryl Cotton to Simon Gallaher to Don Lane.

"I want to get into the area of making music for those people who something a little more."

Stephen has just released a solo single, We All Make Mistakes.

"The plan is to put out four singles and treat each one as a different project," he explained.

"Actually, I recorded We All Make Mistakes eight months ago just for something to do.

"But Regular Records heard it and that's how it all came about."

"It's a pity the single wasn't released earlier as Stephen is now one of the victims of the dispute between radio stations and record companies.

That means the single can't be played on Melbourne or Sydney radio.

"It was very frustrating to hear about that as this single is the introductory step for the whole concept," he said.

The dispute adds new meaning to Stephen's hit song with The Sports, Who Listens To The Radio?

Despite his new solo career, Stephen is adamant he will not go on the road.

"I will not be getting a band together," he said emphatically.

"You are always travelling and you don't have time for important things like your friends or going to the football.

"If you're staying in hotel rooms all the time, all you can do is watch television or drink."

Despite Stephen's dislike of touring, The Sports were a big attraction in Australia and overseas with such songs as Don't Throw Stones, Strangers On A Train and How Come.

"We did four albums, which is a lot for an Australian group," he said.

"We also went overseas three times, so we have done all we could.

"I think we made some good records which were a bit different from what other groups were doing.

"But at the time, I was so busy that I didn't really appreciate what was happening."

When The Sports broke up, Stephen took a break from the music business and worked in, of all places, the props department of Channel 9.

"Before I was in The Sports, I went to art school, so I knew a lot of people who were into all that," he said.

"They were pretty surprised to see me. They kept saying 'What on earth are you doing here?'

"I just explained to them that I wanted a break from music for a while."

A greatest hits album, All Sports, will be released before Christmas, but Stephen denied that the band would reform for a one-off tour like Dragon did.

"We're not getting back together," he said.

"It's become a standard joke between Michael Gudinski (Mushroom Records boss) and me.

"He rings up and says 'I've booked you in for a three-week tour to coincide with the album's release'.