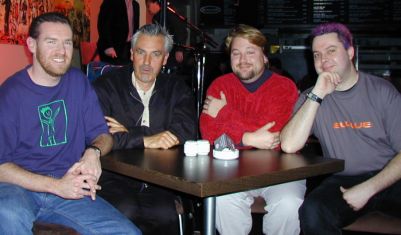 If it's not already clear, this is a fan built web site, albeit supported by Stephen himself. The site was created in a burst of enthusiasm in 1995 to become the first significant reference point for SC fans. Although primitive then, it has since grown to detail almost every aspect of Stephen's creative career. The site has two basic aims: to introduce Stephen and his work to newcomers, and to provide information to his existing fans.

All pages on the site are assembled, hand-coded and maintained (using vi!) by me, David Gilliver, an Australian currently living and working in Melbourne. I design the site structure and manage the content that is supplied by our various contributors. For more information about me, see my personal home page.

My principle co-conspirator is Ross Robinson, a graphic artist currently based in Sydney. He has been responsible for scanning most of the images here and has guided the general look of the site since it was created. Basically, it's his work that makes the pages look slick. As an added bonus, he has also contributed some of the album reviews, articles and stuff like that.

The mailing list for Stephen Cummings fans, The Big Room, is administered by myself and Andrew J. Cosgriff. While I generally do all the easy stuff, Andrew also handles various behind-the-scenes technical issues (even the lovetown.net web server!). Mr Cosgriff, your assistance is greatly appreciated!

There have also been many other contributors, who have diligently typed up album reviews, submitted their own (it doesn't have to be published anywhere to appear here!), helped with our attempts to accurately transcribe lyrics and offered various other assistance.

Particular thanks to the following contributors (in completely random order):

It should go without saying that we especially value the contributions and support of Stephen Cummings himself.